For electronic devices in automobiles, it is easy to list MCUs, a large number of sensors, drive components, etc., and it seems difficult to think of a "not too eye-catching" analog-to-digital converter (ADC). In fact, ADCs, especially sigma-delta ADCs, are distributed throughout the car. ADC is making traditional sensors no longer traditional. Sensors in the traditional sense usually play the role of signal adjustment, which converts some very small small signals in the objective world into electrical signals that can be recognized by electronic devices, but The current state of the art is that more and more digital processing is being introduced inside these traditional purely analog sensors, including the sigma-delta ADC.

Increasingly, the industry is merging sensors and sigma-delta ADCs to optimize sensor performance. Engineers examine sensors and converters in both analog signal acquisition and digital post-processing requirements, which not only allows the converter to "fully excite" the performance of the sensor components, but optimizes sensor performance while minimizing costs.

The Î£-Î” ADC is generally considered to be the most complex analog-to-digital converter architecture. Its analog part is very simple (similar to a 1-bit ADC), while the digital part is much more complicated. It combines the unique â€œsamplingâ€ with The "noise reduction" technique is divided into digital filtering and extraction units according to functions. Since the sigma-delta ADC is closer to a digital device, its manufacturing cost is relatively low.

In general, Î£-Î” ADCs have very high resolution (16-24 bits), but at a lower speed (10-480 KSPS). Due to the high-rate oversampling technology, the requirements for filtering and preamplifying the sensor signal are reduced, and signal conditioning is virtually eliminated, so it is very suitable for measuring small signals from sensors such as strain gauges, thermocouples and resistance temperature sensors without Sample-and-hold amplifier or gain adjustment amplifier.

Due to the increased integration, advanced "digital sensor" products have a variety of design advantages or more "smart". The ADC can use internal calibration and linearization procedures to process the sensor output; the sensor can correct sensor gain and offset and generate an on-chip sensor excitation signal; a digitally controlled programmable gain amplifier can be used to â€œoptimizeâ€ the ADC to a specific sensor reading, then Reconfigure to read a different signal from the same sensor. The ADC has built-in temperature monitoring and adjusts the converter output based on temperature to calculate and eliminate thermal errors. Microelectromechanical (MEMS) sensors, such as accelerometers and gyroscopes, also incorporate data sensors to sense inertia and rotational motion, making them ideal for a range of automotive applications, including automotive safety and stability control systems. In short, this means that designers don't have to pay too much attention to how to deal with specific sensor performance issues as they have in the past, speeding time to market and mostly improving performance.

The introduction of digital processing enables automotive electronic systems to implement some very advanced and very useful functions, including zero point cancellation, self-diagnosis, filter band setting, and adjustable range. The reason why the Î£-Î” ADC plays an important role in this is mainly due to its architecture. 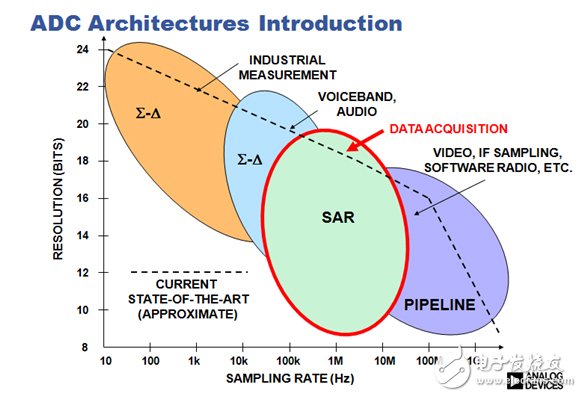 Figure 2 above shows a comparison of ADC sampling rates and accuracy for various architectures. Usually we have the consensus that the most common general architecture is the successive approximation register (SAR) type; the main type for high resolution (the industry that requires digital processing of various signals from small to large) is Î£ - Î” type; most analog-to-digital converters currently processing high-speed signals are pipelined.

Although the Î£-Î” ADC is not as fast as the ADC of other architectures, it does not affect its application in automobiles. For the detection of vehicle rollover, the angular velocity of the tire on the side of the car at the beginning of lifting is not high.

Figure 3 illustrates an example of the application of a sigma-delta ADC in a MEMS sensor, including three aspects: airbags, electronic stability systems, and rollover stabilization systems. 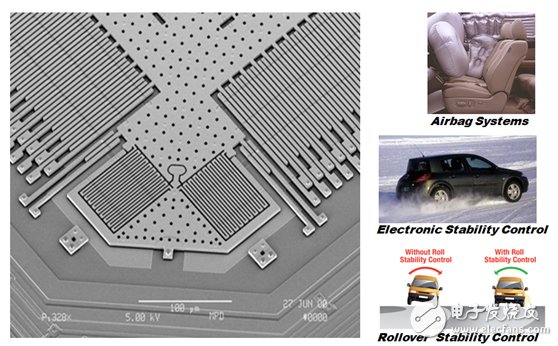 Whether it is an airbag or an electronic stability system or a rollover stabilization system, the system design principle is based on the use of MEMS sensors to detect the attitude of the car. For example, the airbag detects the acceleration and deceleration of the displacement caused by the collision when the collision occurs. When the acceleration reaches a certain level, it can be judged that this is a collision, not the deceleration brought by the brake of the car itself. MEMS sensors are not just detection signals, but also exist as a decision maker.

For the electronic stability system, it is necessary to judge whether the car's turning on the snow is also side-slip. When the car turns, there is an angular velocity. When the angular velocity reaches a certain level, it is an abnormal side slip rather than a turning of the vehicle itself. The tendency to roll over is also an angular rate. A variety of MEMS sensors, such as accelerometers and gyroscopes, are used in this.

However, the electrical signal detected by the MEMS sensor is very weak, which requires it to be amplified, and then converted to a digital signal output by a converter with a certain number of bits, and then sent to a microcontroller or processor for analysis to obtain a specific acceleration. Value. This is the architecture of the traditional older generation MEMS sensor, which consists of a unit that drives the mechanical MEMS, and then uses AC to excite, and the differential electrical signal is amplified and demodulated when the action occurs, so this is a simulation. The signal is directly outputted by the MEMS unit when the displacement is changed by the external action.

This Automation curtain is specially designed for automation industry. SDKELI LSC2 light curtain is designed for automation field, with small size, compact structure and strong anti-interference ability, and the product meets IEC 61496-2 standards. The Automatic Light Curtain is with reliable quality and very competitive price. It has been used in many factories and has replaced curtains from Sick, Omron, Banner, Keyence, etc.