Lamps are indispensable appliances in human life, and it is very important to detect the effects of light radiation generated by lamps on human health. Not only ultraviolet radiation, visible light, and infrared radiation have an impact on human health. This effect has a positive impact on human physiology, and there may be potential harm to the human body. In 2002, CIE published CIE S 009/E:2002 in the same year, which specified hazard limits according to the corresponding guidelines of ICNIRP (International Commission on Non-Ionizing Radiation Protection). These guidelines are derived from the most applicable experimental studies. In 2006, IEC equivalently adopted CIE S 009/E:2002, and published the photobiological safety of lamps and lamp systems. Due to the huge impact of IEC on safety, the safety of light radiation of lamps has been quickly paid attention to. In the same year, GB/T 20145-2006 "Photobiosafety of lamps and lamp systems" was adopted and published in China.

In this paper, according to IEC 62471:2006, combined with the detection points in the actual test, several details that are easily overlooked in the detection process are analyzed. According to the standard, the radiation hazards of various lamps are classified. The main types of hazards are shown in Table 1. As can be seen from Table 1, it is necessary to evaluate the hazards of a luminaire, mainly from the photochemical UV hazard of the skin and eyes, the near-ultraviolet hazard of the eye, the blue light hazard, the thermal hazard of the retina, the heat of the retina, the weak, the visual stimulus, the eye Infrared radiation and other aspects to evaluate.

1 Limit the field of view

When measuring the photochemical UV hazard of the skin and eyes and the near-ultraviolet hazard of the eye, due to a series of reasons such as the physiological characteristics of the human eye, especially when testing a relatively long lamp in a certain direction (such as a T5 tube bracket), attention must be paid to limiting the view. The light of the field. The opening angle is not greater than 1.4 rad, and the field diaphragm should be set such that the distance between the end face of the test source and the end face of the detector is measured, and then the limit length of the pupil is calculated according to the plane angle of each of the normal directions of the detector.

This consideration lies in the normal lighting needs of humans using lighting fixtures and the human eye avoidance distance. However, in this test distance, the test direction of the luminaire has certain experience. It is easy to consider measuring the hazard value in the direction of the mechanical axis or the illuminance axis of the luminaire. This consideration is very incomplete and judge the measurement direction of a luminaire. It must be considered in many aspects. First, the brightness is the most important consideration. The maximum illuminance of the parameter is not equal to the maximum brightness. Secondly, the maximum brightness is not equal to the maximum damage. Again, the direction of the luminaire is changed. Due to the constraint of the 500 lx criterion, the distance will be generated. Change, and then the source of the tour will change the string angle. Therefore, the choice of test distance will initially be considered very easy, but in fact it is very difficult to judge the maximum damage value of the lamp in different directions and at different distances.

4 relationship between eye movement and time

Normal people's eyes, when looking at an object, do a slight irregular movement at a frequency of a few hertz. This rapid movement of the eye causes an image of a point source to be spread over an area of â€‹â€‹the retina that is about the size of the opposite corner of about 0.011 rad. This is a difficult point in the safety of light radiation and ordinary photometric measurements. As the target gaze time increases, the gaze ability decreases, causing the radiant energy of the target on the retina to be spread over a larger area. It should be noted here that only radiation with a wavelength between 380 nm and 1 400 nm can be transmitted to the human retina through normal eye medium radiation. Since we evaluate the photobiosafety of a luminaire very closely related to the exposure time, the relationship between eye movement and time must be very clear when measuring the calculation. 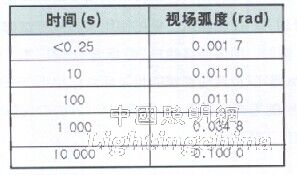 Evaluating the photobiosafety of lamps and lamp systems is complicated because it is not a simple point source, but an extended source, and it is not a single-spectrum source, but a broadband source. Therefore, in the measurement, we need to consider some actual conditions in the environment of the lighting system to make judgments. These above problems are some of the detection details that we are most likely to encounter in actual testing. If these issues are not fully considered in accordance with the standard, there will often be large deviations in the test, affecting the classification of the lamp and lamp system security level.