At the recent G20 summit, President Xi Jinping pointed out that new technologies such as artificial intelligence and virtual reality are changing with each passing day. The combination of virtual economy and real economy will bring revolutionary changes to people's production methods and lifestyles. Subsequently, the National Development and Reform Commission issued a notice on the organization of the application of the Internet + domain innovation capacity building, encourage the construction of virtual reality / augmented reality technology and the application of national engineering laboratories to support the development and engineering of virtual reality / augmented reality testing and other technologies. Baidu VR browser, which has been in a low-key state before, was officially launched for the first time, and it is also responsive to current events.

VR virtual reality has been in foreign countries for more than 60 years. Until 2016, it became a common hotspot in the field of consumer electronics at home and abroad. With the accumulation of foreign VR technology, Google and Microsoft browsers have announced that their browsers support VR. In recent years, VR has spread to China, so compared with foreign countries, domestic VR started late, but it grew very fast. Moreover, the development trend of domestic VR industry chain is relatively stable. From intelligent hardware, content production, application platform to media environment, a clear VR industry chain has taken shape. This is an important driving factor for BAI's active layout of VR, and it also paved the way for Baidu VR browser to be released almost simultaneously with its foreign counterparts. 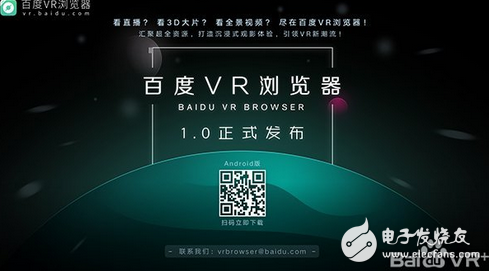 More than just Baidu, Tencent is also actively at the forefront of technologies such as AI (Artificial Intelligence) and VR (Virtual Reality).

Application Bao will become the first product of Tencent artificial intelligence first attempt. Zhou Tao, general manager of Tencent mobile application platform, will introduce the application version 7.0, which will be officially released in the fourth quarter of this year. The new version will be fully upgraded and applied in version 7.0. The user can directly send instructions to the robot to obtain the service without downloading the APP.

At present, there are many applications in the market, and many manufacturers rely on Tencent's application treasure to differentiate. According to Tencent, 8,000 developers have joined the â€œApp+â€ and the application content library has exceeded 30 million. This means that once artificial intelligence is used, the application differentiation will be more intelligent.

"The developer who accesses the open platform of the robot will get a very flexible robot scene. Not only enjoy the entrance in the application treasure, but also establish a desktop shortcut or generate a separate APP, and will be implanted in the entire platform of Tencent, thus covering each Scene." Zhou Tao stressed.

Industry analysts pointed out that the future of mobile Internet will fully realize the direct contact between users and content and services. The technical capabilities including artificial intelligence are important driving forces for direct access to content and services. Mobile Internet users will experience one. A major revolution in the way human-computer interaction takes place.

After experiencing hot speculation, VR seems to have cooled down in the near future.

However, the father of Unreal Engine "TIm Sweeney also expressed great confidence in the future of new technology, he said:" Perhaps ten years later, we may wear VR glasses like ordinary sunglasses, and then derive new The digital economy without consumption. In such a virtual economy, people can trade virtual goods at will, and it may surpass the current real economy, so that each user can create value by himself.

Wang Bo, vice president of Tencent, believes that for the VR industry, it is now the winter of capital, the spring of industry; it is the winter of hype, the spring of hard work. The concept of pure hype is hard to attract everyone's attention. At present, the underlying technology required for the development of VR has made substantial breakthroughs in academics. As long as the technology is carefully researched, the products are polished, and the content is developed, the results will be harvested in the future.

Tencent COO Ren Yuxi revealed that Tencent hopes to introduce the VR platform and solutions to the market when the technology is mature and the product experience meets the requirements, and launch the VR open platform for the VR field. The company will also launch the VR open platform, from hardware access and software. Establish an open VR ecosystem in multiple dimensions such as applications and content industries.