In recent years, driven by Apple's iPhone, the smartphone market has expanded rapidly. An important feature of portable products such as smartphones is the increasing functionality to support a wider range of consumer needs. However, the operating voltages of integrated circuits (ICs) or modules used to support different functions inside portable products such as smart phones are often different. For example, the baseband processor and application processor voltages are generally between 1.5 V and 1.8 V, and many existing ones are available. The operating voltage is generally 2.6 to 3.3 V. For example, the USIM card, Wi-Fi module, and FM tuner module operate at 2.8 V, while the camera module is 2.7 V.

Therefore, there is an input/output voltage mismatch between different ICs and peripheral modules in portable products such as smart phones. In order for these devices to communicate with each other, efficient logic voltage level conversion is required. The so-called logic level converters are ICs and modules or printed circuit boards (PCBs) that connect different operating voltages to provide a system integration solution.

Traditional logic level conversion method and its advantages and disadvantages 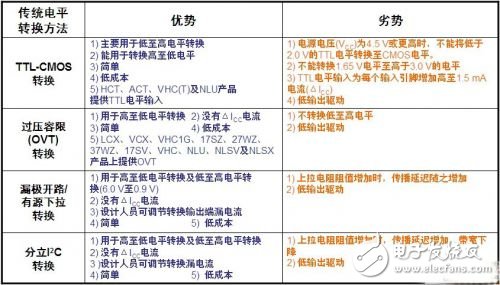 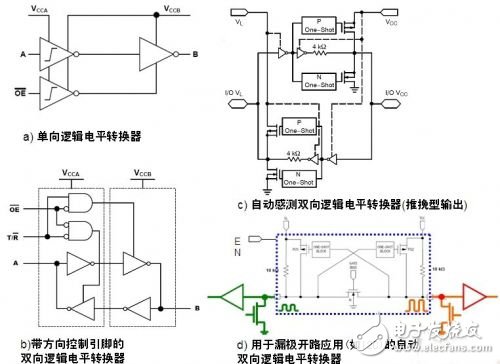 The automatic sensing bidirectional logic level shifter (push-pull output) works by setting the enable (EN) pin low when the converter is in standby; the EN pin is high, I/O level When the constant is unchanged, the converter is in steady state; when the EN pin is high and the I/O level changes, the converter detects the change and generates a pulse, and the I/O is pulled up by the P-channel MOSFET (PMOS) to Faster. Typical auto-sensing direction bidirectional logic level shifters (push-pull outputs) are such as ON Semiconductor's NLSX3012MUTAG, NLSX3013FCT1G, NLSX3013BFCT1G, NLSX4014MUTAG, and NLSX3018MUTAG. Common applications for such converters include Universal Asynchronous Receiver Transmitter (UART), USB ports, 4-wire SPI ports, and 3-wire SPI ports.

The auto-sensing bidirectional logic level shifter for open-drain applications (such as I2C) also contains three states: the EN pin is high, the NMOS is on, it is active, and the input I/O level Pull down to ground, that is, input low level; EN pin is high level, NMOS is in high impedance state, it is in working state, output I/O level is pulled up to VCC, ie input high level; EN pin When low, the converter is in standby. Typical automatic sensing bidirectional logic level shifters for open-drain applications such as I2C are such as ON Semiconductor's NLSX4373MUTAG, NLSX4348FCT1G, and NSLX4378BFCT1G. Common applications for such converters include the I2C bus, Subscriber Identity Module (SIM) card, single-wire (1-Wire) bus, display module, Secure Digital Input Output (SDIO) card, and more.

Metal Film Resistor is Film resistor (Film Resistors) of a kind.It is the high temperature vacuum coating technology will be closely attached to the porcelain nickel chromium alloy or similar bar surface skin membrane, after debugging cutting resistance, in order to achieve the final requirements precision resistance, then add appropriate joint cutting, and on its surface coated with epoxy resin sealing protection.As it is a lead resistance, it is convenient for manual installation and maintenance, and is used in most household appliances, communications, instruments and instruments.