In terms of simultaneous robot positioning and environmental mapping, the use of probabilistic methods to solve the SLAM problem is the current research direction and hotspots [4]. Among them, the extended Kalman filter (Extended Kalman? l-ter, EKF) SLAM method is not suitable for solving the existence. The estimation problem of non-Gaussian noise conditions [5]; the particle filtering method is suitable for nonlinear and non-Gaussian cases, but this method is too computationally expensive when the problem dimension is high, and it is difficult to meet the real-time requirements of the system; Rao-Blackwellized particles The filtering uses the extended Kalman filter to process the nonlinear part and the particle filter to deal with the non-Gaussian part. Therefore, it has the advantages of extended Kalman filtering and particle filtering, and has been successfully applied in SLAM [6âˆ’8]. However, due to the airborne sensor, the robot observation error is coupled with the motion error, and the positioning and mapping errors will inevitably spread with the robot's moving distance [9]. In [10], a particle-assisted wireless sensor network-assisted SLAM method based on particle filter is proposed to solve the problem of high spatial dimension and multi-data association problem. The literature [11] proposes a mobile robot SLAM method based on distributed sensing of sensor networks. To create accurate maps of large-scale environments; [12] proposed a particle-filter-based mobile robot SLAM algorithm in wireless sensor network environment. Although the above methods all reflect the idea of â€‹â€‹using the global observation of the sensor network to assist the SLAM, but the calibration problem of the sensor network node has not been considered, and the effective solution of the problem is the basis of the sensor network to assist the robot positioning and environmental feature mapping.

The object discussed in this paper is the ubiquitous robotic system, which consists of three parts: a sensor network with universal sensing and processing capabilities, a processing host, a mobile service robot interacting with a ubiquitous processing host, and each in the environment. Targets (including service objects, operational items, and environmental roadmaps, etc., collectively referred to herein as targets). Figure 1 shows a schematic diagram of a typical home ubiquitous robotic system. The implementation scheme is as follows: The RGB-D camera is used as a node to construct a sensor network. The camera can simultaneously acquire the color and distance information of the target in the field of view. The -D camera is connected to an image capture card of a processing host through a data line. The host is responsible for analyzing and processing the images captured by the cameras, and communicating with the service robot through the wireless network; the home service robot platform is equipped with a hand-eye system. Pioneer3DX mobile robot, and designing color blocks for the robot to observe and locate the sensor nodes; selecting the scale-variant feature transform (SIFT) of the home environment and target [16] for feature detection, matching and recognition. In addition, the QRcode tag that identifies the name, function, and usage of the common target for the family can achieve deeper knowledge of the item by reading the tag robot.

Node deployment of sensor networks needs to consider factors such as node observation range, energy consumption, and obstacle distribution. This problem has been discussed in related literature [17âˆ’19]. It is not discussed here, assuming sensor nodes have been deployed reasonably. . 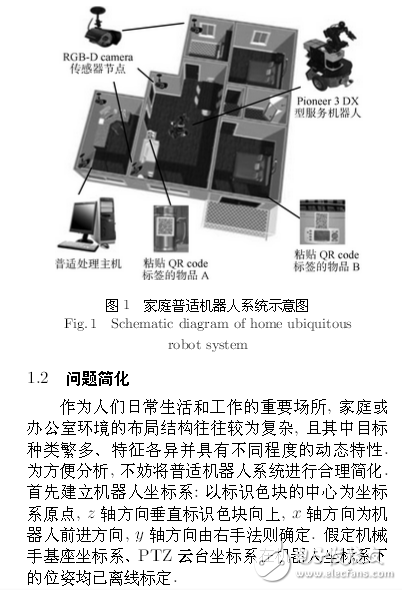 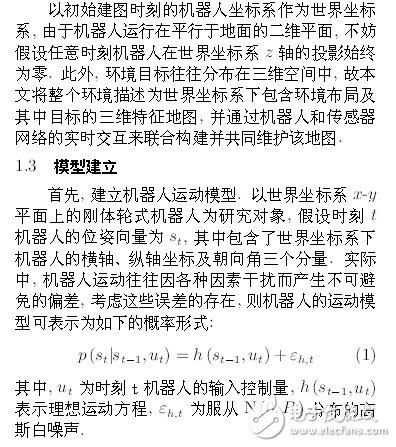 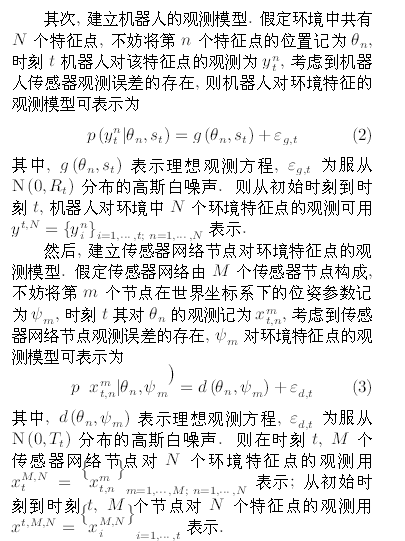 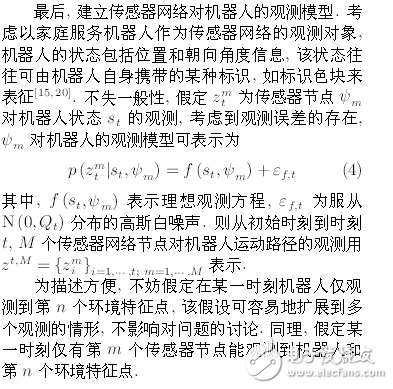 From the point of view of probability, the probability density of the universal robot system for simultaneous positioning, calibration and mapping can be used. 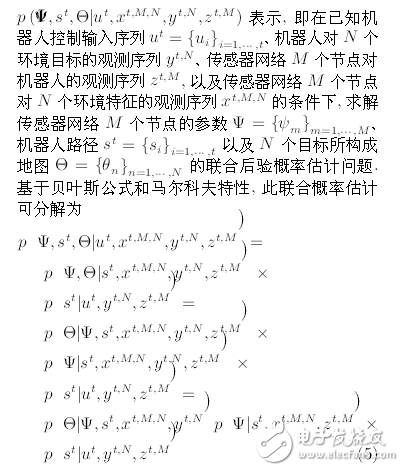 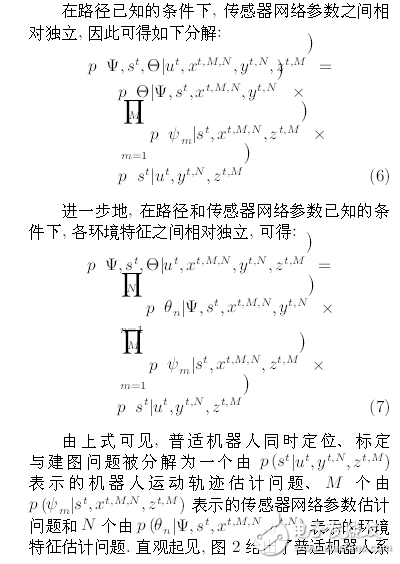 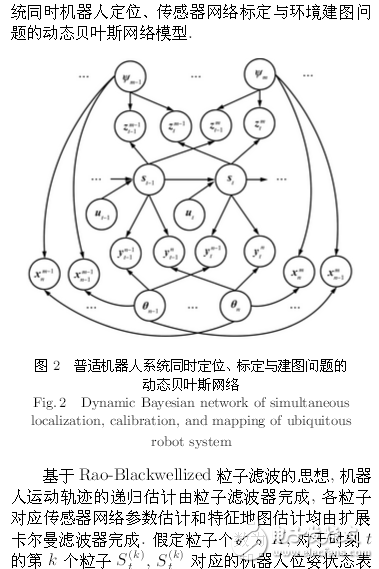 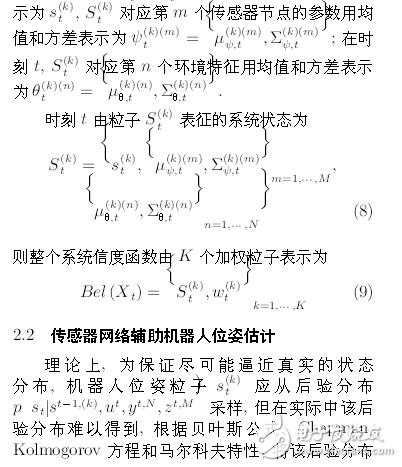 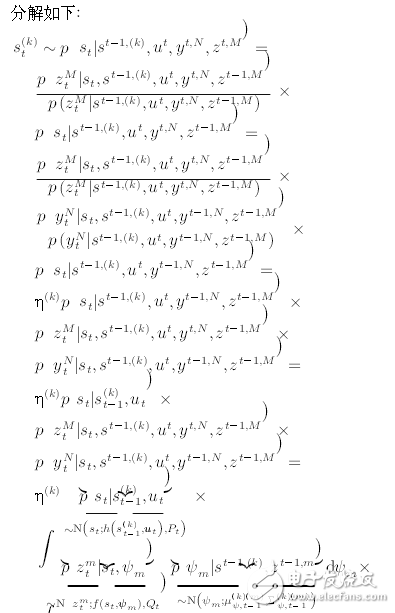 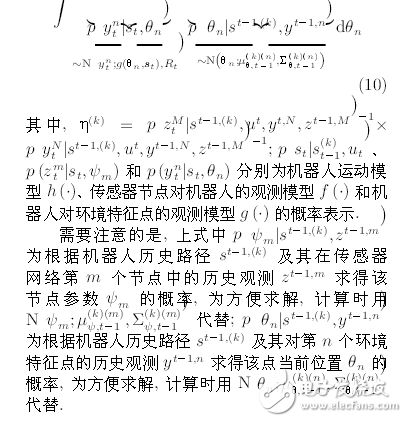 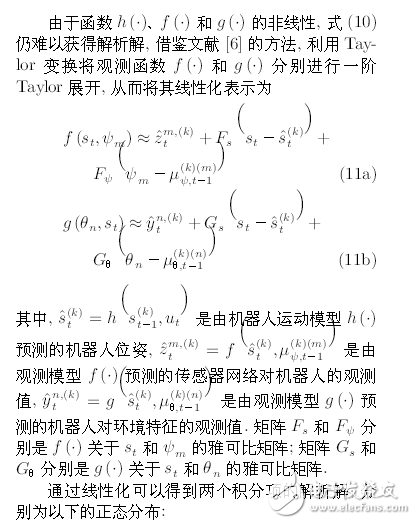 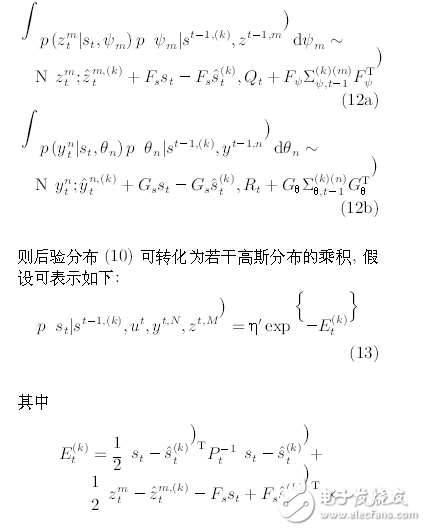 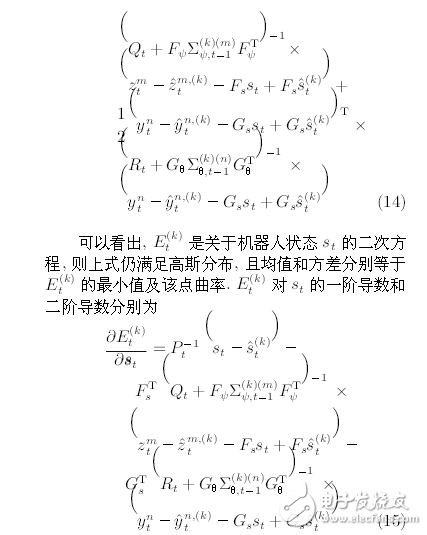 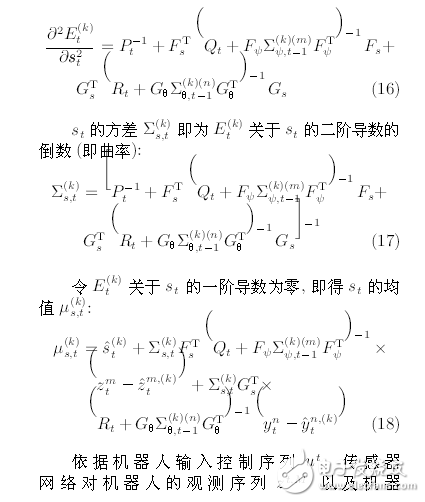 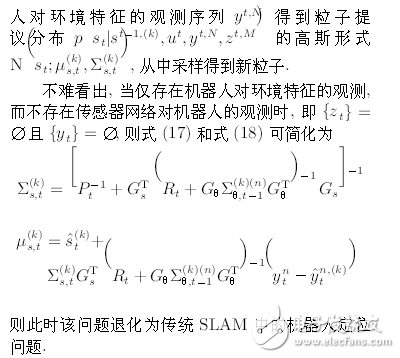